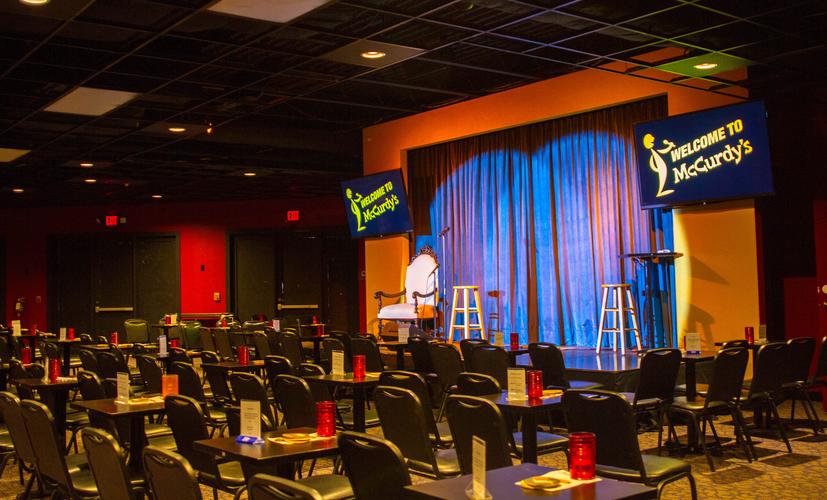 If you are visiting Anna Maria Island, Longboat, Bradenton, or Sarasota then McCurdy’s could be just what you are looking for.  McCurdy’s is a great comedy club that is sure to get you laughing.   They bring in great comedians all year around.  The night we attended was a to be announced week which is very unusual for this comedy club.  The opening acts warmed up the crowd well and the club finished up the night with some improvisation which was fun and got the crowd involved.

The Sarasota comedy club has plenty of showtimes and it is always suggested to buy tickets prior to showtime by calling the box office for reservations… (941) 925 – 3869.  At the time of this post McCurdy’s has show times Wednesday through Sunday with lower weekday show prices and higher rates for Friday and Saturday shows.  One great option for McCurdy’s is many of the comedy shows are NON-SMOKING.  In addition, they rate each show with a brief description of what kind of jokes and profanity the comedian will use.  This is helpful for larger families traveling to Anna Maria Island.

Some quick rules of the comedy club… There is a two item purchase minimum per person.  They of course have beer, mixed drinks, non-alcoholic drinks and offer a quick bite to eat if you need a snack.  The average cost of a drink is about $8 plus tip and taxes.  I would not call their food a meal so plan on grabbing a full meal before or after.  All visitors of the comedy club must be at least 18 years of age.

Be careful with Google directions as it tried to take us off Tamiami to the comedy club and McCurdy’s is directly right off Tamiami only about 15 or so blocks to the South of the Sarasota-Bradenton Airport.

Meet Kacey Varga – Revenue Manager for Island Real Estate Vacations.  Kacey is a native of Bradenton, FL – just across the bridge from Anna Maria Island – and is an expert on all our area has to offer for visitors to our piece of paradise.