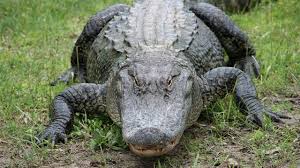 Anna Maria Island – Florida has an amazingly complex eco system home to everything from the Florida Black Bear to the majestic manatee, but a little known fact is that Florida is one of the only geographies that can support both alligators and crocodiles. So do these scaly reptiles pose a threat to the average vacationer?

Well let’s look at the facts; alligators are not naturally aggressive creatures. There were only 10 fatal alligator attacks in the US between 1970 and 2000 (compared to the 25 fatal attacks by house hold dogs just between 1970 and 1980). This works out to be about .3 per year and several of these reports were of people who started out with harassing or feeding alligators in their natural habitat. Crocodiles however claimed over 50 lives between 1990 and 1994. Having said that, NONE of these attacks occurred in the US furthermore these attacks were all credited to the freshwater crocs (like the one in the picture to the left) found in southern Africa and Australia, not the much more docile saltwater crocodiles found here in Florida.

In addition to this the American Alligator is known as a “Keystone Species” or one whose presence can affect the entire ecosystem. For example before the endangered species act alligators were hunted because local fishermen thought this would improve the numbers of game fish in the water. The outcome was an overpopulation of a type of fish called gar, and what is the meal of choice for gar? You guessed it, game fish and this caused a steep decline in their numbers. So at the end of the day the odds of an alligator invasion of your vacation rental is highly unlikely, if you leave them alone they’ll probably do the same. But if you find yourself yearning for an up close encounter they can be found at the Myakka State Park and viewed up close and personal from airboat tours.