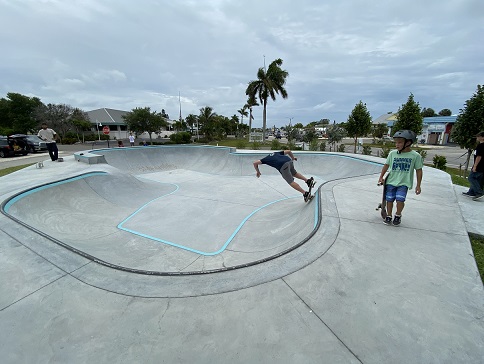 Join our excitement to see the ALL NEW Holmes Beach Skate Park. Updated 2020!

Built in 2003, the Holmes Beach skatepark has been well loved and enjoyed by locals yet after 15 years became in need of repairs. With help from one of the designers of Bradenton’s Riverwalk skatepark, the city looks to ride the momentum of what is considered by skateboard enthusiasts as not only a sport, but a lifestyle.

The Holmes Beach park, located at 5901 Marina Dr., closed in 2017 for repairs. The city took the opportunity to look at ways to enhance and expand the park. It remained closed throughout 2018 as early conceptual designs for a new park mimicked a lot of what is already there and residents rejected what was being offered.

The city went back to the proverbial drawing board and in December, Tito Porrata of Pivot Custom Skateparks, working with city engineer Lynn Burnett, presented an updated design that was widely accepted by the community and elected officials.

The city commission agreed to move forward and pledged $150,000 toward the redesign. A drop-in bowl is still being considered for the new park.

The toddler park that was next to the skatepark is being moved close to the pavilion at City Park to the north of City Hall. Titsworth said it’s to make room for the new skatepark, but also gives a better separation of the smaller children from those using the skatepark.

Other improvements coming to the city is a proposal to add a kayak launch and nature trail at Grassy Point and the city is making improvements at its dog park. The baseball field is being redesigned as a multipurpose field, which will leave room to relocate the existing large dog park and make improvements, while the small dog park will remain at its current location.