If you are in town while the Island Players are in session be sure to visit the Anna Maria Island theater!

Take in a fantastic “home grown” play at the historical Players theater at 10009 Gulf Drive in the city of Anna Maria. Usually the Island Players have five different shows that go on from middle of October to the middle of May. They claim to be “the best little playhouse in Florida” and also the oldest community theater in Manatee County.

The Island Players Theater seats 143 in tiered rows. Tickets cost $23/person or season tickets can be purchased. Tickets can be bought at the box office in person or by phone at (941) 778-5755.

Also visit the Island Real Estate Local Scene page for tons of fabulous suggestions for things to do while visiting Anna Maria Island. 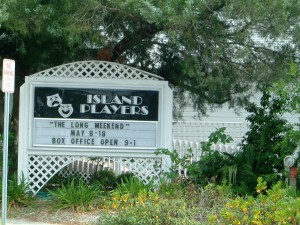 For 65 seasons, the Island Players has brought Shakespeare, modern comedy, and chilling thrillers to the beautiful beaches of  north Anna Maria Island. Conveniently located at 10009 Gulf Drive (on the corner of Pine Avenue), the Island Players fulfills all of your histrionic needs! If you’re looking for musicals, be sure to check out the Sarasota Players or the brand new Manatee Performing Arts Center.

An Act of the Imagination: October 10-20

Over the River and Through the Woods: December 5-15

Performances run Tuesday through Saturday at 8 pm; Sunday at 2 pm. Tickets are $20.

Join the Island Players Theater
of Anna Maria Island for an evening of fun while you are on the island!

The theater, located on the corner of Gulf Dr and Pine Ave in Anna Maria, offers a season of theatrical events.

Performances are evenings at 8pm and Sunday matinees are at 2pm.

The 64th Season started with the show Postmortem which was performed October 4-14.

4 more shows will round out the season: