Anna Maria – As you wander down the beach, watching the waves dance to a brief kiss on the sand, imagine the fierce spirit it took to develop this tropical paradise from then to now. It helps to eat a Fig Newton while you are pondering, because….

In 1891 a Philadelphia baker, Charles Roser invented and then patented the machine which inserted fig paste into a thick pastry dough. Kennedy Biscuit Company purchased the Roser recipe and started mass production in 1891. The product was named Newton after the small town of Newton, Massachusetts. When Kennedy merged with the New York Biscuit Company to form NABISCO, they trademarked Fig Newtons.

Around that same time, George Emerson Bean had homesteaded the northern 160 acres of Anna Maria Island in 1892.

With his financial windfall from the sale of his recipe and patent on the machine to make Fig Newtons, Charles and his wife moved to St. Petersburg, where he started a real estate development company. Charles had a sharp business mind and realized the opportunities that this little oasis provided. He partnered with Beans’ son, George Wilhelm Bean, after he inherited his fathers homestead in 1898 and the Anna Maria Beach Company was born.

They laid out the street maps, built sidewalks and a water system and began selling lots. At this time the only access to the island was by boat, so Roser built a 678 foot long pier to accommodate the ferries that would bring residents and day trippers to the Anna Maria Beach Company. Next he built the Roser Memorial Church in homage to his beloved mother. It was the first church on the island and has continued to grow and flourish over the 101 years it has been in existence! Roser also had a real estate business office built right at the end of Pine Avenue to catch the eye of everyone stepping off the pier to enjoy the island. It was a dream to own a piece of this paradise back then and it still is. For more interesting information on Anna Maria Island, check out the AMI Historical Society. 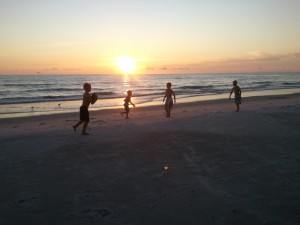